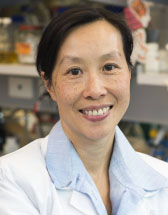 Helicobacter pylori (Hp) is a prototype of a cancer-inducing pathogen. This motile rod-shaped Gram negative bacterium colonises persistently in the human stomach, causing chronic gastritis and gastric cancer in susceptible individuals. Virulent Hp expresses a Type IV secretion system (T4SS), a major virulence factor which functions as macromolecular machine gun that 'shoots' virulence proteins and peptidoglycan molecules into the host cells. Recently, we discovered that a novel adhesin of Hp, CagL, is expressed on the surface of T4SS and is able to dock onto integrin receptors on human gastric epithelial cells, turn on integrins and simultaneously trigger the secretion of other virulence molecules into the stomach cells. Once intracellular, the Hp virulence factors including CagA and peptidoglycan then interact with specific host signalling molecules to trigger activation of host tyrosine kinases, nuclear factor kappa B (NFΚB) and/or downstream proinflammatory responses such as the secretion of cytokines. Meanwhile, the vacuolating toxin secreted by Hp dysregulates normal host cell functions, causes severe cytotoxicity and disrupts the gastric epithelium. The molecular basis of how Helicobacter infection progresses into cancers however remains largely a mystery. Our lab is interested in using a multi-disciplinary approach to understand the pathogenesis of Helicobacter-associated malignancies.

The Helicobacter pylori Methylome: Roles in Gene Regulation and Virulence