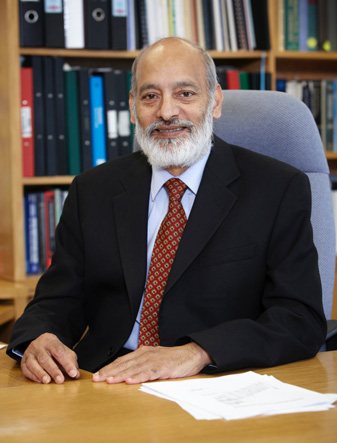 Professor Tamarapu Sridhar is one of Monash University's longest-serving academics. His association with Monash began nearly 40 years ago in 1974 as a PhD fellow in Chemical Engineering. Today, as former Dean of the Faculty of Engineering, he serves as Vice President of the University's Indian and Chinese Initiative.

Professor Sridhar has had a distinguished career as an academic engineer, and is an outstanding scholar with an international reputation in the area of polymers. He is a Fellow of Engineers Australia, the Australian Academy of Technological Sciences and Engineering, the Institution of Chemical Engineers (UK) and the Australian Academy of Science. He was made an Honorary Fellow and awarded the GP Kane Award by the Indian Institute of Chemical Engineers.

Professor Sridhar was awarded the Australian Centenary Medal for service to Australian society and science and the ESSO Energy Award for outstanding contribution in the field of chemical engineering. In 2004, he was Chair of the Institution of Chemical Engineers (Australia) and during his career he has served as a member of the ARC Panel on Engineering.

Professor Sridhar has an outstanding record of research, with over 140 publications. He has been awarded individually, or as co-investigator, around 44 competitive research grants and has supervised more than 22 PhD candidates.

Professor Sridhar's tertiary education began at the University of Madras in South India, where he completed a Bachelor of Engineering, followed by a Masters degree at the Indian Institute of Science in Bangalore. As he considered his next step towards a PhD overseas, a colleague recommended Monash. He applied and was offered a PhD fellowship in 1973.

Professor Sridhar first arrived at Monash in March 1974 to undertake his PhD in Chemical Engineering with the Faculty of Engineering. After completing his PhD, Professor Sridhar took up a senior teaching fellowship at Monash for two years, after which he joined the State University of New York at Buffalo, USA, also in a teaching position. He returned to Monash as a Senior Lecturer to continue the work started during his PhD and was promoted to Reader five years later.

In 1992, Professor Sridhar successfully applied for a professorial position within the Department of Chemical Engineering and became Head of the Department for the following eleven years.

At the end of 2002, Professor Sridhar entered his current role as Dean of the Faculty of Engineering.

Professor Sridhar is the founding co-editor of the Korea-Australia Rheology Journal. He is also highly regarded as a consultant on chemical engineering matters, both nationally and internationally. Through years of distinguished service in research, teaching, community service and administration, he has helped to shape research excellence at the Faculty of Engineering, the University and the international research community.

Shear thinning in dilute and semidilute solutions of polystyrene and DNA