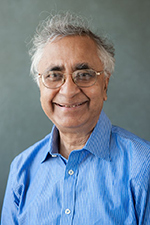 A measure of social justice

Deprivation and social justice are not only recurring themes in Professor Ranjan Ray's wide-ranging research, but ones that cut firmly through some established boundaries. 'The old line between developed and developing countries, and development and non-development economics, is blurred and that's reflected in my research,' he says. 'I don't divorce the two.'

An early interest in data, methodology, analytical framework and policy has persisted throughout Ranjan's 30 or so years in economics research, but he has slowly shifted his emphasis away from statistics and towards development.

'I don't see development as being only the preserve of or restricted to third world countries,' he says. 'There are a lot of developmental issues and implications for people in Australia; the divide between indigenous and non-indigenous people, for example.'

One-time boundaries are also collapsing, he says, as booming countries like India and China close the gap in one direction, and global financial crises draw others back.

Poverty and inequality are relevant across the spectrum. Ranjan has recently been widening his study of such issues to multidimensional deprivation, a term that recognises the complex nature of deprivation, of which capacity to spend is merely one aspect.

'You may not be poor but you may be deprived,' he says. 'It is perfectly possible that you are above the poverty line but still don't have access to health, to electricity, to schooling, to water.'

His research drills deeper to determine how different groups in society are affected, comparing, for example, those who own their own homes and those who don't, city dwellers and those in remote areas, and indigenous and non-indigenous people.

This project highlights Ranjan's broad view of his field, using not only data from developing countries but also Australian data from the HILDA (Household, Income and Labour Dynamics in Australia) survey.

Other research relates to issues arising throughout the development spectrum.

Child labour is a longstanding interest that sits at the developing end, as does a current project on the interplay between corruption and the informal sector. Small businesses such as tea-stalls tend to slip under the radar; some may be entirely legitimate, others may not. Ranjan is considering whether corruption contributes to the informal sector, and vice versa.

Quite different issues -- the effects of price changes, measurements of equality, and how inflation redistributes wealth towards or away from certain socioeconomic groups - involve study of developed nations such as Australia and Britain.

Living Standards, HIV/AIDS and its Impact on the Next Generation

Modelling decision making within the household and analysing its welfare implication: Methodological advances with policy applications

Differentiating between dimensionality and duration in multidimensional measures of poverty: methodology with an application to China

Food consumption, calorie intake and undernourishment in India: the recent evidence on role of welfare schemes

A framework for the simultaneous measurement of spatial variation and temporal movement in prices in a heterogeneous country: the dynamic household regional product dummy model

A multidimensional dynamic measure of child disadvantage: a methodological tool for policymakers