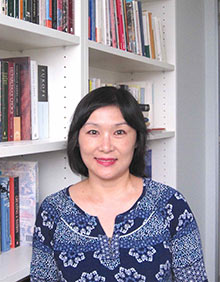 Nathalie’s work deals with memory, war and migration. Her research focuses on the Vietnamese diaspora and the experiences of refugees.

She was Director of the National Centre for Australian Studies (NCAS) in 2017, after serving as Deputy Director and Acting Director in 2016. She joined the School of Philosophical, Historical and International Studies (SOPHIS) in 2018.

She is a graduate of the Universities of Melbourne and Oxford. On completing a B.A.(Hons) at the University of Melbourne, she was awarded the Dwight Final Examination Prize and the Professor Alan Rowland Chisholm Memorial Prize before winning a Commonwealth Scholarship and Fellowship Award to the University of Oxford, where she obtained her doctorate.

Nathalie is the author of 4 books, two of which have been translated into other languages. Her third book Memory Is Another Country: Women of the Vietnamese Diaspora, 2010 Choice Outstanding Academic Title, was translated into French and published in Paris in 2013, her second book Voyage of Hope: Vietnamese Australian Women’s Narratives was shortlisted for the 2007 NSW Premier’s Literary Awards, and her first book Vietnamese Voices: Gender and Cultural Identity in the Vietnamese Francophone Novel was nominated for four international awards including the Kiriyama Prize.

She also guest edited 2 Special Issues of the refereed journals Intersections and Crossroads, and is editor of New Perceptions of the Vietnam War: Essays on the War, the South Vietnamese Experience, the Diaspora and the Continuing Impact (McFarland, 2015).

Her latest book South Vietnamese Soldiers: Memories of the Vietnam War and After (Praeger, 2016) breaks new ground by shedding light on an essentially unexplored aspect of the Vietnam War: the histories of the men – and women – who served in the former Republic of Vietnam Armed Forces. It had 6 launches worldwide in 2016-17, including Boston College on 29 September 2016, the University of California, Berkeley, on 18 October 2016, and the Australian Defence Force Academy on 7 March 2017.

“Nathalie Huynh Chau Nguyen has made a major contribution not only to the history of the Vietnam War but also to the history of wars and their aftermath.” Peter Edwards, Official Historian of Australia’s Involvement in Southeast Asian Conflicts 1948-1975

“In a powerful and eloquent book, Nguyen rewrites the South Vietnamese back into their own history and gives them back their voices. This is an important and overdue treatment of the missing dimension of the Vietnam War.” Jeffrey Grey, Professor of History, UNSW Canberra at the Australian Defence Force Academy

"[An] outstanding book... The South Vietnamese military - which lost a quarter of a million men killed in action and nearly 1 million seriously wounded - has largely been ignored, forgotten or dismissed as irrelevant. This excellent and much-needed book, however, gives voices to those unknown soldiers of the Vietnam War, and constitutes an important and necessary addition to the burgeoning scholarship of the war." - Vietnam Magazine

"Nguyen's remarkable achievement is her ability to allow the veterans to speak for themselves in this groundbreaking study from that tragic conflict. Summing Up:★★★★ Essential. All levels/libraries." - Choice

"Nguyen's book is a welcome and important contribution to the study of the Vietnam War, the South Vietnamese state and society, and the post-1975 Vietnamese diaspora. It is also a fine example of the use of personal testimony to explore the complex and ongoing interplay between history and memory." - Australian Historical Studies

"[A] very important contribution to our understanding of the ARVN and its soldiers. South Vietnamese Soldiers explores the battlefield experiences of multigenerational combat veterans and military doctors. ...Nguyen's book breaks ground with its broader societal focus, especially in its inclusion of the children of ARVN veterans." - The Journal of Southeast Asian Studies

"There is much to commend about this well researched book. It offers a rich and at times heart-wrenching reconstruction of the experiences of combatants whose efforts have been written out of national history by an authoritarian regime and are rarely acknowledged... This book is a valuable addition to the historiography of the Vietnam War." - History Australia

"Nguyen uses oral histories to reveal a key facet of the Vietnam War in a way that challenges U.S.-centric narratives... This work certainly helps to fill a gaping hole in the Vietnam War's historiography while better balancing recognition of who fought." - The Journal of Military History

"This book does what oral history enables one to do: it adds to the historical record the experiences and perspectives of groups of people who might otherwise have been hidden from history... South Vietnamese Soldiers thus provides new and valuable first-hand accounts by South Vietnamese soldiers about their service during the war and their lives in its aftermath." - Oral History Review

The Refugee Legacy for the Second Generation: The Vietnamese in Australia

Vietnamese Women: Voices and Narratives of the Diaspora

5 Questions About: South Vietnamese Soldiers: Memories of the Vietnam War and After

Years of Separation: Vietnamese Refugees and the Experience of Forced Migration after 1975

'My Husband Was Also a Refugee': Cross-Cultural Love in the Postwar Narratives of Vietnamese Women

South Vietnamese Soldiers: Memories of the Vietnam War and After