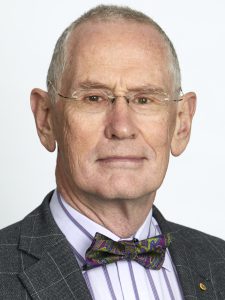 If you made any changes in Pure these will be visible here soon.

Michael Kennedy is one of Victoria's most experienced and innovative private and public sector chief executive officers. After an extensive senior management career leading transformational change in the business sector, in the bus industry, in road, rail and sea freight, in logistics and in manufacturing, he came to local government as a chief executive officer, just prior to Victoria's local government reform process, leading successful organisational and business reforms at two of Victoria's largest municipalities.

While in business and in the public sector, Dr Kennedy undertook leadership roles with industry and professional peak bodies, and in significant community organisations, with a strong focus on driving reform and transformational change. Throughout Dr Kennedy's extensive career as a management practitioner he contributed to tertiary education as a member and/or chairman of industry advisory committees at three universities, actively participating in subject and course development and review, and lecturing for many years in management practice and theory.

Dr Kennedy’s work brought him into ongoing contact with State Government at senior political and bureaucratic levels, initially through effective advocacy, then through membership of Ministerial and other councils/committees, providing input into policy development and implementation across a range of ministerial portfolios, including in transport and land use policy and strategy development, and chairing organisations reliant on significant State Government funding, again leading transformational reform processes.

Dr Kennedy undertook doctoral research into customer-focused team-based management and leadership, to inform his leadership of transformational change programs. He has contributed to Victorian public sector reform thought leadership as a member of the Institute of Public Administration Australia's 'Public Sector of the Future' Committee, chaired by a senior departmental secretary. He provided reform advice to a number of State Government departments and statutory authorities.

As first permanent CEO, led the amalgamation of Camberwell, Kew and Hawthorn to create a single, service-focused, responsive and cost-effective local government which, after four years, had achieved its strategic and financial objectives, and had the highest community satisfaction rating in Victoria.

Led the transformation of the Shire post-amalgamation from unviable and poorly performing to one of the State's best-performing local governments, delivering high quality services and infrastructure at rate levels among the lowest in the State, achieved through a strong focus on innovation. Strong relationships were built with State Government, based on policy and strategy leadership in key policy areas.

Short-term appointment, to provide advice to the Minister for Roads and Ports on future port management arrangements, following 25 years of externally contracted management. Developed and secured approval for a Risk Management Plan for the port, a Major Hazard Facility, having identified significant weaknesses in risk management.

This UNESCO approved foundation included State Government departments and agencies, as well as five local governments, as members. Its shared objective was/is to achieve social, economic and environmental objectives in the planning and management of sensitive, highly valued natural assets, including the operation of a port, a steelworks and a fractionation plant in an internationally approved RAMSAR wetland.

Board Member, Civic Mutual Plus

Advising the Transport and Roads Ministers in relation to the provision of road-based public transport across the State.

Advising the Planning Minister regarding the implementation of land use and related transport strategies to facilitate Melbourne's accelerating growth.

Developed, for the Transport Minister, the governance model for the creation of Public Transport Victoria, drawing on research into public transport entities across the world.

Dr Kennedy's network of contacts in government, initially established while in the business sector, in transport, shipping, logistics and manufacturing, then sustained and further developed in the public sector through a range of appointments, provides a sound base for advocacy to State and Commonwealth governments. Set out below is a small sample of advocacy projects successfully undertaken.

Leading a major advocacy campaign on behalf of Interface Councils secured $80M in additional recurrent funding for bus services in outer Melbourne, a doubling of public transport services on the Mornington Peninsula in five years, and won a national public relations award.

Secured Commonwealth funding for an express bus service from Mornington Peninsula to Monash University at Clayton, to facilitate time-effective access to tertiary study to Peninsula residents. This is significant in that the Commonwealth does not fund bus services, and it required the creative co-operation of Commonwealth, State and Council officers, and the bus operator, to 'find a way' to fund the service, which is now permanently established as a PTV service.

Described as "an achievement of generational significance", this gazettal addresses the potential conflicts between the economic development of a diverse $11 billion local economy, while protecting the highly valued local environment, and defining the Peninsula's future role relative to Melbourne's accelerating growth.