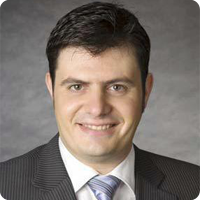 Dr. Joaquin (Ximo) Sanchis Martinez is part of The Monash-Warwick Alliance and is based in Prof. Sebastien Perrier's group at The Monash Institute of Pharmaceutical Sciences (MIPS). His research focusses on designing and making nanomaterials that can deliver therapeutics drugs directly to a disease site. Dr Sanchis completed his PhD in Supramolecular Chemistry at the University of Valencia, Spain. Following his PhD he worked as a researcher at BASF (Ludwigshafen, Germany) in the department of intermediates (GCI/C) to design a new method for waste materials conversion. He then joined Prof. Manfred Reetz's group at Max-Planck Institute (Muelheim, Germany) where he focused on Enzyme Engineering by Directed Evolution. Prior to joining Monash he was in teh research group of Dr. Maria Vicent's lab at Centro de Investigacion Principe Felipe (CIPF) in Valencia, Spain where he focussed on Polymer Therapeutics with an application in the treatment of cancer and regenerative medicine. He has collaborations Prof. Cameron Alexander's group in University of Nottingham, UK and Prof. Paolo Caliceti's group in Padova, Italy.