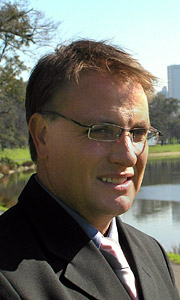 Jeff Jarvis graduated with a Bachelor of Economics and a Master of Management by research (specialization: International Marketing) from Monash University. He was awarded his PhD in January 2008. He specialises in the field of Tourism Marketing and Tourism Development. He is also a founding member of the cross faculty Tourism Research Unit (TRU) at Monash University.

He has been co-ordinating the Graduate Tourism Program at the National Centre for Australian Studies (NCAS) since the mid 1990s and has focused on internationalising the program as well as integrating it with the tourism industry.

After a number of years working in advertising, market research and direct marketing, he entered academia and authored the report "The Billion Dollar Backpackers" in the mid 1990s. This report unearthed the fact that this segment is one of the highest yielding to Australia (in 2007 they accounted for roughly 10% of visitor arrivals but 19% of tourism yield and were worth a total of $3 billion to Australia.)

Jeff was appointed to the Federal Tourism Ministers Committee for Youth Tourism (Backpackers) and helped to devise the blueprint for the marketing award winning "Backpacker strategy" for the Australian Tourist Commission.

In 1997 he along with Dr Victoria Peel developed the Contemporary Australia Program which was designed to introduce visiting international students at Monash University to Australian society, culture and lifestyle. This program has grown over recent years and has been developed by the Australian Broadcasting Commission (ABC) into a radio series offered via the internet by Radio Australia. (See: http://www.abc.net.au/ra/australia) This unit is now also offered at Copenhagen University in Denmark.

In 2003 he was invited to participate as part of the European Union funded TEMPUS project in constructing a strategic plan for the development of tourism and cultural industries in Bosnia - Herzegovina. He has also been instrumental in establishing an innovative tourism internship program for Australian students in Eastern Europe (Estonia).

In 2004 he was invited by the Australian Ambassador to Sweden, Finland and the Baltic States to assist in co-ordinating the inagural 'Estonia - Australia Day: Strengthening the Relationship' in Tallinn, Estonia on September 20, 2004. This culminated in Australia signing a 'Working Holiday Visa' agreement with Estonia.

In both 2006 and 2007 he was awarded a visiting research fellowship at the Estonian Business School in Tallinn, Estonia. Whilst there he has conducted research on the development of the Estonian tourism industry.

In 2007 he was invited by the United Nations World Tourism Organization (UNWTO) to address the World Tourism Conference in Kuala Lumpur, Malaysia, on the topic of backpackers/independent travellers and tourism development. http://www.worldtourismconference.com

n 2008 he was awarded a visiting fellowship in Australian Studies at Copenhagen University in Denmark. http://english.australianstudies.ku.dk/om/ In 2008 Jeff was appointed to Tourism Victoria's Backpacker Strategy reference group which devised the state's strategy for backpacker/independent traveller tourism. In January 2009 he was appointed to the 'Backpacker and Working Holiday Maker task force' at Tourism Victoria and awarded industry seed research funding for a proposed upcoming ARC linkage application with Tourism Victoria investigating the motivations, travel behaviour and economic impact of Working Holiday Makers (WHMs) in Victoria and Australia.

Backpackers and Independent Travellers in Fiji 2018-2019

Research output: Contribution to conference › Other

Tourists for hire: International working holidaymakers in a work based destination in regional Australia

Flashpacking in Fiji: Reframing the ‘global nomad’ in a developing destination

Backpacker tax would drive away visitors