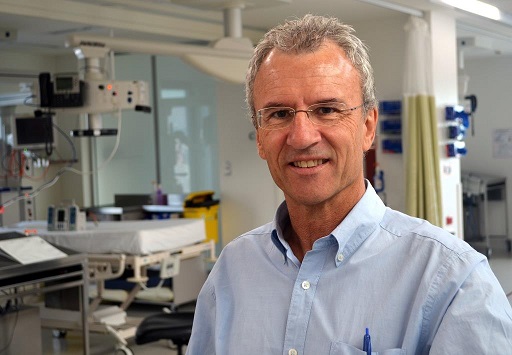 Professor Jamie Cooper is Director of the Australian and New Zealand Intensive Care Research Centre (ANZIC-RC), Monash University; Director of the NHMRC Centre of Research Excellence for Patient Blood Management in Critical Illness and Trauma (Blood-CRE), Monash University; Director of Critical Care Research in the School of Public Health and Preventive Medicine (SPHPM), Monash University; and Head of Research and Deputy Director of the Department of Intensive Care at The Alfred Hospital, Melbourne.  In 2017, he was awarded an Officer of the Order of Australia (AO) for distinguished service to intensive care medicine in the field of traumatic brain injury as a clinician, and to medical education as an academic, researcher and author. He is a National Health and Medical Research Council (NHMRC) Practitioner Fellow, full Professor of Intensive Care Medicine at Monash University and Hon. Professorial Fellow in the Critical Care and Trauma Division at The George Institute, University of Sydney. He has published >300 journal papers including 18 in New England Journal of Medicine (NEJM), Lancet, and Journal of the American Medical Association (JAMA). He has been a Principal or Co-investigator on peer reviewed research grants exceeding $70m including 30 NHMRC grants. Research foci include randomised clinical trials in traumatic brain injury (TBI), sepsis, acute lung injury, resuscitation fluids, and blood transfusion.

He has published three landmark trials including the DECRA trial (CIA NHMRC#314502), which demonstrated unexpectedly inferior long-term outcomes for an increasingly popular neurosurgical intervention (early decompressive craniectomy) that was opposite to apparent short-term benefits, and has initiated international TBI practice review. The trial results were fast tracked for NEJM publication (Cooper DJ, et al. 2011) and were editorialised in the Lancet as “one of the most important clinical trials of a therapy for severe TBI ever conducted”. The trial results have been a watershed in changing current practice and have proved invaluable from both an individual patient and community perspective. This was the first Level I evidence in this area and has been incorporated into the international Brain Trauma Foundation practice guidelines. Using alternative therapies will improve TBI patient outcomes and substantially reduce health care spending on lifetime care of severe disability survivors. DECRA was included in Yale University’s 50 most important papers of all time “that shaped the current clinical practice of neurology” and was also included in the “50 of the most important studies in Critical Care Medicine” by Harvard University and Oxford University Press.

PANGEA - A Double-Blind Placebo-Controlled Study with an Open-Label Pilot Phase, Assessing the Efficacy, Tolerability, and Safety of EU C 001 in Patients with Moderate to Severe Traumatic Brain Injury.

Age of blood - Let the claret age a bit. Results of the TRANSFUSE Trial

Monash: Delivering Impact: Cool heads may save a lifetime of pain

“A long cycle for life” (the Great Alfred Bike Ride)