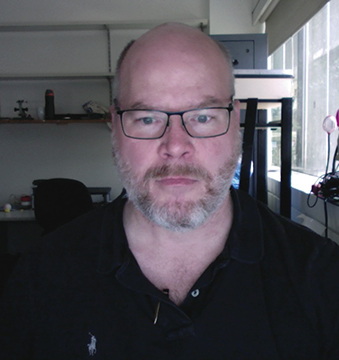 I completed my PhD at the Albert Einstein College of Medicine in New York, USA. After working in in pharmaceutical R&D, I returned to academic research in 2006, in the Sensory Systems and Cognitive Neuroscience laboratory in the Department of Physiology at Monash University. I currently hold a combined teaching and research appointment in the graduate entry medicine program at the Gippsland campus.

My research interests have spanned a wide variety of model systems and topics surrounding the primary question of how the brain combines external sensory information with stored representations and emotional information to form a coherent picture of the outside world. Since 2011, I have been studying the functional organization of the claustrum, a brain nucleus which has dense connections to most of the other areas of the brain, and seems to be involved in large-scale changes in activity across brain regions when an organism needs to redirect attention or identify salient features in the environment, although this remains controversial.

Interest in the claustrum has blossomed in recent years, as evidence builds that it is a key component of the organization of normal mental activity, and may even play a role in the formation of consciousness itself. This burst of activity has resulted in publication of special editions devoted to the claustrum in several major journals, including the Journal of Comparative Neurology- Claustrum and Frontiers in Systems Neuroscience (available as an E-Book at Frontiers in Systems Neuroscience-Claustrum).

In 2013, I co-founded the Society for Claustrum Research, an international scientific organization devoted to study of the structure and function of the claustrum.

The claustrum enigma: unlocking the role of the last unknown area of the primate brain

Cortical Afferents of Area 10 in Cebus Monkeys: Implications for the Evolution of the Frontal Pole

The relationship between the claustrum and endopiriform nucleus: A perspective towards consensus on cross-species homology