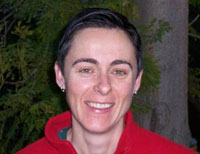 Some of the smallest residents of Australia's tropical rainforests have turned scientific thinking about climate change on its head. Researching insects, evolutionary biologist Dr Carla Sgrandograve; has found that not all species possess the genetic capacity to survive rapid environmental change. Carla's findings are helping to refine government policies on biodiversity management, and are motivating her to step into the policy arena.

For many years the dominant belief in evolutionary biology has been that all living things can evolve and adapt to changes in their environment. But Carla's research has found this is not always true.

She has been tracking the short lives of a species of vinegar fly found in the rainforests of Far North Queensland. In only a few years she has traced the evolution of more than two-dozen generations of the fly.

In a similar timeframe other insect species have developed insecticide resistance - a classic form of biological evolution. An example of this is resistance to dieldrin, which was widely used on a range of agricultural pests in the 1950s. Targeted pests that survived had the genetic capacity to adapt to the chemical. Within five years their offspring had inherited resistance to the insecticide.

But this adaptability was not what Carla found in the vinegar fly species she studied.

'The thinking was that all organisms have the capability for genetic variation. But we have found the exact opposite. Our data shows that the tropical rainforest vinegar flies have remained in that habitat because they simply don't have the genetic capacity to adapt to conditions outside. However, closely related fruit fly species have been able to expand their environment much further afield.'

The restrictions that hold true for rainforest insects may also hold true for other species, she says. This includes higher order species such as tree kangaroos or wallabies whose habitat is known to be under threat.

Carla's own fascination with evolutionary biology has driven her research into the genetics of environmental adaptability. It is now motivating her involvement with state and federal policy-makers.

'Explaining the relevance of my research to policymakers is an ongoing challenge, but I am trying to make it happen. The conclusion we have reached, working with insects and short-lived plants, is that it is possible to protect genetic diversity and evolution through current management actions and programs.'

VicRoads is one government agency that has already revised vegetation policies based on Carla's findings. She says efforts to plant trees to restore vegetation and prevent degradation need to take climate change into account.

She says this strategy effectively attempts to future proof fragile environments, rather than attempt to fix a situation that has 'gone bad'.

'Instead of trying to save a species that is on the verge of extinction, we can minimise the threats to its environment to give it as much chance of survival as possible.'

Are the sexes really equal? Sex-specific adaptation to environmental change

Will life be tougher in the tropics? The evidence for latitudinal variation in vulnerability to climate change

Comparing thermal performance curves across traits: How consistent are they?

Conservation practitioners’ understanding of how to manage evolutionary processes

Interacting with change: Diet mediates how larvae respond to their thermal environment