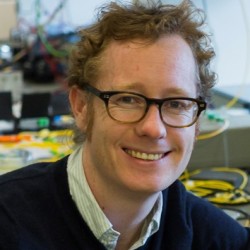 Bill is a Lecturer at Monash University (Melbourne, Australia), with research focusing on optical communications and the application of photonics to communication systems.

Bill had his PhD conferred in Physics at the University of Sydney in 2011, focused on light-by-light control on photonic chips (enhanced optical nonlinearities in silicon waveguides), and it's applications to fibre optic systems. From 2011 to 2013 he held a post-doctoral position at Chalmers University of Technology (Gothenburg, Seeden) ) on a novel type of optical amplifier (phase-sensitive fibre optic parametric amplification), and the use of their unique properties in optical communications.

In 2014, he joined Monash as a project leader the Terabit-per-second Systems flagship of ARC Centre for Ultrahigh Bandwidth Devices for Optical Systems (CUDOS), focused on processing high-capacity optical 'super-channels'. In 2015, he joined the faculty as part of the department of Electrical and Computer Systems Engineering at Monash, and began establishing the Monash Photonic Communications Laboratory.