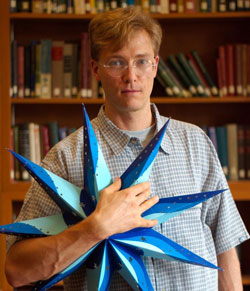 The origin of the elements

Current work comprises the study of massive to supermassive stars (10-100,000 solar masses); the first generations of stars in the universe (Pop III stars); evolution of rotating massive stars and the spin of their remnants (including predictions for GW sources); mixing and transport processes in the stellar interior; nucleosynthesis and the origin of elements, including galacto-chemical evolution - which elements are made where and when; supernovae (mechanisms and nucleosynthesis); gamma-ray bursts (collapsars and similar models) and their progenitors; modeling of Type I X-ray bursts and superbursts (thermonuclear explosions on the surface of neutron stars); stellar rotation of misaligned systems (internal rotation evolution, binary and mutile stars dynamics and interaction).

Associate Professor, School of Physics and Astronomy, Univeristy of Minnesota, 2008-2012.

Happy to help with problems related to Python and numerical applications (Numpy).

Nuclear reactions in superdense matter - from the laboratory to the stars

Uncovering the enigmatic origins of the brightest supernovae

Evolving stellar models to find the origins of our galaxy

Explosions of blue supergiants from binary mergers for SN 1987A