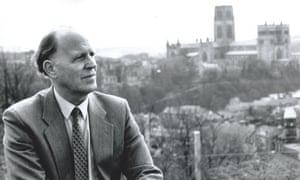 Peter Carr, seen here with Durham Cathedral in the background, worked diligently in various public service roles until his mid-80s

My friend Peter Carr, who has died aged 87, had a remarkable and varied career, including in industrial relations and as a leader of health service improvement. His focus was always on promoting productivity through constructive bargaining as a partnership between employers and workers, represented by unions.

Peter grew up in Mexborough, South Yorkshire, the son of George Carr, a printer on the South Yorkshire Times, and his wife, Marjorie (nee Tailby), who engaged in entrepreneurial endeavours such as making sandwiches for working men’s clubs. Peter’s first job after leaving school, aged 13, was as a building-site joiner. His leadership skills were already apparent and he was soon working as site manager. This was interrupted by national service with the Royal Air Force mountain rescue team between 1951 and 1953.

Sponsored by the woodworkers’ union, he then studied politics and economics at Ruskin College, Oxford. He went on to lecture in Yorkshire and Essex colleges on management, labour history and economics, his students mostly shop stewards and managers. In the 1960s he led pioneering exchange courses between UK, Swedish and French trade unions.

Peter took increasingly senior roles in governmental agencies: the Prices and Incomes Board; the Commission on Industrial Relations (CIR); the Advisory, Conciliation and Arbitration Service (Acas); and the Department of Employment. At the CIR and Acas, he helped to investigate, prevent and settle industrial disputes. Although as a young man he was active in the Labour party and the Fabians, Conservative as well as Labour governments repeatedly re-appointed him to key leadership roles.

He led international missions and was labour attaché for the UK government in Washington DC for five years from 1978. He organised study exchanges between US and UK union leaders and employers.

When Peter returned to the UK, he applied industrial relations skills as regional director of North East City Action, encouraging economic development. In 1990 he became chair of the Northern Regional HealthAuthority and in this role, and subsequent ones, he led a transformation of health services. The NRHA became the best performing region in the NHS. He was knighted in 2007.

He went on to chair the English NHS Trust Development Authority, when it was established in 2011. He served diligently in various roles until he was in his mid-80s.

His recreations included cinema, photography, cabinetmaking, cycling, cooking and US history. He founded the Northern Screen Commission, which found settings in the north for many films, including from the Harry Potter series. His memoir, It Occurred to Me (2016), humorously charted major moments of political history in which he participated. As a Europhile, he was appalled about Brexit.

He is survived by his wife, Geraldine (nee Ward), whom he married in 1958, son, Steve, daughter, Alyce, and four grandchildren.