Academic Dr Melissa Petrakis has won a research award in the 2016 TheMHS Awards program for service to mental health.

Dr Petrakis won The Tom Trauer Evaluation and Research Award. It was given in recognition of Academic mentoring, collaboration and co-production in mental health services research.

It was one of eight Awards made in the Service and Program categories, three for Exceptional Contribution, three for research and four for Media. 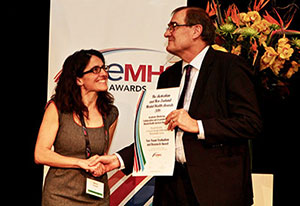 The Award was announced last month at the Annual TheMHS Conference held this year in Auckland, New Zealand.

It acknowledges excellence in the way Dr Petrakis approached research and championed co-design, co-production and co-authorship, with an emphasis on questioning and learning together, combined with respectful mentoring.

Dr Petrakis has worked in mental health services and programs for 20 years, the first decade as a clinician and the second as a practice-based researcher. She has engaged in extensive collaborative research with people with lived experience of mental illness and their families, with interdisciplinary  staff within clinical services, and with programs and staff across the community support services sector; evidenced by 37 publications (including 16 as first author).

She has delivered over 60 national and international conference presentations. Her strengths-based mental health research contributed to a Silver Award at TheMHS (2011) and 'Highly Commended' at the Victorian Public Healthcare Awards (2011); and the co-production approach received a 'Special Judges'  Commendation' at TheMHS (2013).

The MHS Awards are presented every year by TheMHS Learning Network to recognise and encourage best practice, excellence and innovation in mental health service delivery. The Awards have been made annually since 1992.